History of the department

Head of the Department of economics and international business,

In 1996, the Department produced the first graduate students of the specialty “World Economy”. From 1996 to 2006, more than 500 students were graduated in this specialty.

Currently, the Department trains specialists in the following educational programs of bachelor’s, master’s and doctoral studies:

By the decision of the accreditation commission of the Institute for Accreditation, Certification and Quality Assurance of ACQUIN (Germany) on May 30, 2012, the educational programs of the Karaganda State University named after Academician Ye.A. Buketov’s “Economics (Bachelor’s)” received international accreditation.

Within the framework of expanding international scientific cooperation with the aim of integrating with the world system of science and education and obtaining joint scientific results, joint research projects were carried out with foreign colleagues:

1) Cooperation with the Higher School of Finance and Management, Prague (Czech Republic);

2) Cooperation with the Graduate School of Economics in Prague (Czech Republic);

3) Cooperation with the Belarusian State University (Minsk, Republic of Belarus).

Joint research projects on the following topics were conducted:

Actively used such method of teaching, as guest lectures. So in the 2013-2016 academic year the following foreign scientists were invited:

– Ladislav Tõll, PhD, associate professor at the Graduate School of Economics in Prague, Czech Republic (course “Entrepreneurship and competitive advantage (How to make your competitors sad);

The main aim of the research activity of the faculty is to develop and support scientific research as the basis of the fundamentalization of education, of the base for training skilled workers in accordance with the needs of the state and society.

The main tasks in the field of scientific research are the following:

The scientific activity of the department is in line with the strategic plan of the University until 2020.

Within the framework of the Strategic Development Plan of the University for 2013-2015, from 2011 to 2014 the teaching staff of the department was carried out the scientific work by the following topics: “Methodological principles and methodology, classification and mechanism of the using the social standards and norms, the development of a national standard for the quality of life”, “The development of the human resources of the region: labor market, employment, social protection”; the results are planned to be introduced into the educational process.

Also, within the framework of the implementation of the tasks of the higher school in the field of research and development, the teachers of the department since 2011 have participated in the competitions of the Ministry of Education and Science of the Republic of Kazakhstan and have implemented the initiative scientific projects. For example, Pritvorova T.P. and Bektleyeva D.Y. take part in a scientific project by the topic: “The development of special social services for elderly and disabled people at home: economic models and mechanisms for their implementation” (agreement with the CS of the MES of the Republic of Kazakhstan No. 1581; priority “Fundamental and Applied Research in the Economic, Social and Human Sciences”). Mamrayeva D.G. from 2015 to 2017, supervised the scientific project by the theme: “Investigating the process of commercialization of innovation in the Republic of Kazakhstan in order to identify problems and develop a mechanism for effective management of the innovation process” (the customer is the Science Committee of the Ministry of Education and Science of the Republic of Kazakhstan). Khussainova Zh.S. participated in the scientific contract 103 U-14 “Training seminar on Entrepreneurship” as a Senior Researcher (Customer – JSC Kazagromarketing) and “Training seminar on the implementation of the “Road employment map change program – 2020”” (customer – PA “Institute of Partnership and Business”) together with the Associated Professors of the Department Akmoldina B.N., Raikhanova G.A. It should be noted, that the staff of the Department carries out an initiative scientific theme: “Conceptual Foundations and Mechanisms of Structural-Innovative and Institutional Modernization of the National Economy in the Conditions of Global Technological Shifts”. The results of work on these topics in the period from 2012 to 2017 was the Proceedings of the Department.

Within the framework of the development of science and the creative activity of the faculty, the main result of the research work of the department is publishing. In the period from 2012 to 2018 the number of publications increased almost 3 times from 56 units to 150 (Figure 1). 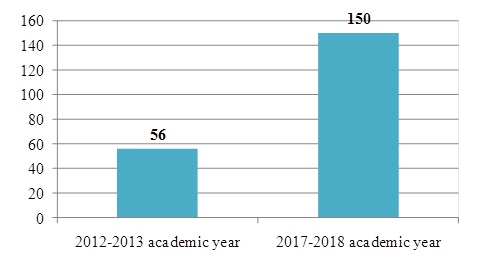 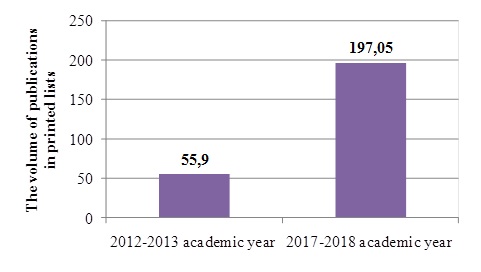 Dynamics of publishing activity in the context of the types of publications of the Department is presented in Table 1.

Dynamics of publishing activity by type of publications

A positive result of the scientific activity of the Department’s staff is the growth of publications in journals with impact factor (Thomson Reuters, Scopus, RISC). The teaching staff of the department is actively published in such journals as “Economic Annals-XX”, “Transport problems”, “Journal of Advanced Research in Law and Economics”, “International Journal of Economic Perspectives”, “Russian Entrepreneurship”, “Economics of Central Asia”, “Bulletin of the Omsk University”, “Bulletin of the Tyumen State University. Socio-economic and legal research”, “Tourism: law and economics”, “Issues of economic sciences”, “Management in Russia and abroad”, “Telescope: journal of sociological and marketing researches”, “National security and strategic planning”, etc. (Figure 3). 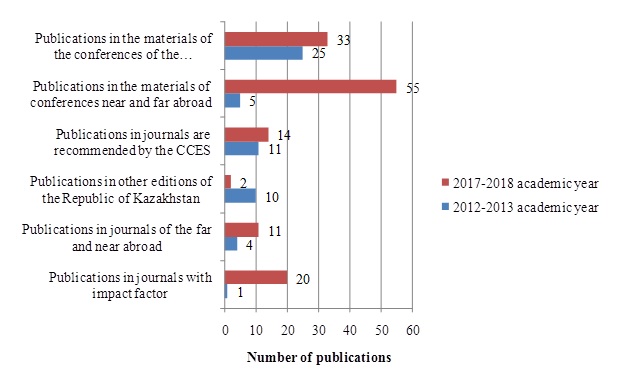 If in 2012-2013 academic year 1 article was published in the journal with the impact factor (0,6 printed lists), then in 2018-2019 academic year – 20 articles, a total of 5,3 printed lists. The activity of the Department’s staff in the publication of articles in journals of the far and near abroad also was increased. If in 2012-2013 academic year 4 articles with a volume of 1,85 printed lists were published, then in 2018-2019 academic year – 11 articles with a total volume of 4,1 printed lists were published. The participation of teachers of the Department in conferences of near and far abroad 10 times was increased. Within the framework of the development of new, progressive forms of scientific and technical cooperation with scientific organizations and industrial enterprises with the aim of jointly solving the most important scientific and technical problems, a good tradition is to hold the annual scientific seminars and round tables at the Department.

Educational work
For the period 2018 – 1919 Educational work at the department:
On October 1, in honor of the Day of Older Persons, 1-3 year students and curators visited a nursing home with a charitable, educational purpose

18.03.2019 Nauryz holiday was celebrated as a competition among students of the department. She made a table with national dishes, dressed in national style and promoted the use of ancient Kazakhs. Students get the opportunity to communicate, strengthen friendship between courses.
20.03.2019 Organized by the Faculty of Economics and Law, all teachers and students received the Grand Prix.

The organization of educational work contributes to the implementation of the program documents of the Republic of Kazakhstan in the field of youth policy.

Students who need a hostel are provided with places in the hostels of the university.

The University created the necessary conditions for self-education of students:

-the opportunity to participate in

-the opportunity to participate in the organs of student self-government

-the opportunity to publication science articles

Students and magister actively participate in ” Week of self-government”, replacing the head of the department of EIB, teachers in special disciplines .

Students self government is a the form of organization the life activity of the collective of students and magister, ensuring the development of independence in the adoption and implementation of decisions to achieve socially significant goals. Student self-government organizes active joint activity, prepares future specialists for interaction in labor collectives. Participation in self-government allows each student and magister to participate consciously and responsibly in the educational process, improves discipline and achievement, stimulates the development of communicative, organizational and creative qualities of the individual.

The goal of student self-government is self-actualization, active civic position, interaction of teaching staff and students, their involvement in public life of the university, promotion of a healthy lifestyle, preparation for professional activities.

Educational process and extracurricular work at the Department of Economics and International Business is aimed at training professional roles among students by creating the necessary conditions for the development of personal self-determination, the creativity of students, the realization of their abilities, adaptation to life in society, the formation of civic consciousness, a common culture, a healthy lifestyle , the organization of meaningful leisure.

Educational work at the Department of Economics and International Business was based on the following fundamental principles: observance of the rights and freedoms of student youth, democracy in the approach to solving youth problems, the unity of education and upbringing, communication with the needs of social development, the creation of a favorable socio-psychological climate, -reducing process.

The convincing result of systematic educational work is the bright victories of the students of the Faculty of Intellectual, creative competitions and projects, sports, cups , debates tournaments, subject olympiads, competition «Zhas Talap”, «Initiation into students», «Day of the department», «Mr. and Miss University», «Student of the year-2017».

At the department dedicated to the 70th anniversary of our esteemed Rosa Kabykenovna and the Day of the Department of Economics and International Business was held on November 18, 2016. and the intellectual game “Give Youth”, in which students of the 1-2 courses of specialties 5В050600 – “Economics”, 5В051300 – “World Economy” and 5В011500 – “Fundamentals of Law and Economics” took part.

This event was held at a high organizational, intellectual and creative level.

Enactus is the largest international non-profit organization, uniting more than 69 thousand students from 36 countries of the world engaged in the creation and promotion of social projects aimed at improving the conditions and quality of life of people.

For 4 years of existence the Enactus Karsu showed itself as an ambitious, competitive and purposeful participant of the Enactus movement, having received in two nominations in 2013 “Best Social Project”, “Best Innovative Project”.

First degree diploma was awarded to a team consist of: Karibaeva A.B., Zhausanova D.T., Asan S., students of KarSU named after E.R.Buketov in IX Worldwide championship “Youth and Entrepreneurship – 2017”, that was in Belarus (Gomel), between 17 and 19 May of 2017. Science advisers: Khusainova Z.S., Zhartai Z.M. The team was rewarded with a cash prize in the amount of 1.000.000 tg.

A student of group WE-32 Zhausanova Diana is a winner of a scholarship competition made by Enactus with Asia Waters with a trademark water Turan.

A student of a 1 course (2018-2019) spetialty 6M011500 – “Basis of economic law” Polevoi Sergey Vladimirovich became an owner of scholarship of the Fund Of The First President Of Republic Of Kazakhstan – Leader of Nation.